Skip to content
You are here:Home-DFF-Brighton-Brighton design students tackle loneliness in the elderly

We have just announced the winners of our second ”Designing for the Future” competition held in conjunction with the University of Brighton.  The students tackled many issues likely to affect us as we get older including loneliness.

Third year Jono Redden became interested in the impact of light on mood and in particular loneliness when he entered “Designing for the Future” last year.  As part of the Graduate Show this year, Jono exhibited “Pets“ which are lights designed to evoke the shapes of domestic pets such as cats. The lights are connected to the internet and in particular social media sites. The more of your friends who come on line, the brighter the light shines thus reminding you of a world (albeit virtual) outside the isolation of your home.  This is the first time I have seen the virtual online world made manifest in this way.  A really interesting idea.

Second year, Lucy MacDonald on the other hand was concerned with combating loneliness in a much more direct way.  “The Public Rocking Bench” invites the users to share the gentle rocking sensation of this piece of public furniture thus stimulating interaction between people and hopefully helping alleviate loneliness. 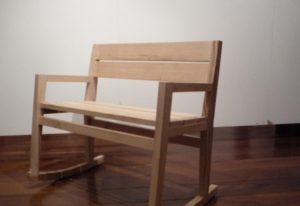 This design provoked much discussion as to whether people would share a rocking bench with a stranger and if so how wide did it need to be and where should it be placed.